This September 4th, historian, technologist, and musician Larry Fast’73 joined us on campus and took us on a journey from the earliest widespread adoption of electronics in the mass culture in the 1830s-1840s through the transition to digital electronic music, dipping into electronic technology advances that moved the musical arts forward as it influenced him as an artist and technologist. This lecture touched on the 19th century physicist Helmholtz, as well as such luminaries as: Tesla, Theremin, Claude Shannon, and Peter Gabriel, among others. Samples from Larry Fast’s own music was also played. Larry Fast has recorded dozens of albums and CDs as the principal musician in addition to his contributions to the live and studio music of Peter Gabriel, Tony Levin, and many others. Before this well attended noontime event in Kirby Auditorium, Fast joined Professor Paul Barclay’s History 206 (The Politics and Practice of History) to lecture on the significance of electrical microphones in the advancement of popular music in the 1920s and 1930s. 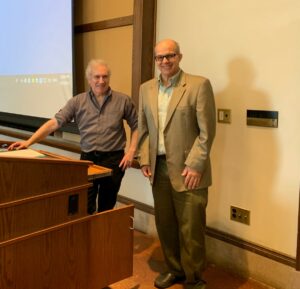