“The Second World War marked a turning point in the management of prostitution in Martinique. The presence of thousands of sailors from the French metropole, stuck in Fort-de-France following a blockade that isolated the island for three years, ushered the adoption of new prostitution policies in the port city. These measures aspired to control intimate relations across racial boundaries, in a colonial setting where French citizenship had been extended to all individuals after the abolition of slavery. Their adaptation to local sexual practices, however, burdened a great number of mainly nonwhite, working-class women, regardless of their involvement in the sex industry—thus revealing the elasticity of the category “prostitute” during the war. Many of these women nonetheless managed to evade attempts to control their body; their actions pointed to the limits of the established system.”

Currently only the French version is available, the English language version will be available at a later date.

Professor Sequin has also spent this Winter Interim period in the military archives in Vincennes, on the outskirt of Paris, and in the departmental archives in Guadeloupe. Below is a picture of her archival findings; it shows the card that was used to register a woman as a prostitute in the city of Basse-Terre, in Guadeloupe. 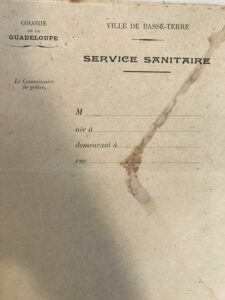