On January 22, 2020, the updated and expanded edition of Professor Barclay’s book “Outcasts of Empire: Japan’s Rule on Taiwan’s Savage Border,” 1874-1945 (University of California, 2018) went on sale in bookstores across Taiwan. As a work on Japanese imperial and Taiwan Indigenous history, it has been taught in history classes and seminars at Leiden, Stanford, Harvard, Yale, University of Wisconsin and many other colleges and universities outside of Taiwan. The new edition was published in Chinese by the Taiwan National University Press as part of the series “Taiwan Studies.” It was translated by Yao Chia-ning, an accomplished author of several academic and scholarly translations. Editor Ts’ai Min-chun worked with Barclay to add more illustrations, while making allowances for a couple more chapters’ worth of text. Professor Barclay says “it was a great honor to be included in this series with so many esteemed Taiwanese, Japanese, and U.S.-based scholars, and to have my book published by Taiwan’s top academic press. I expanded the English-language edition to make it more suitable for an audience already familiar with the basic contours of Japanese imperial and Taiwan colonial history.” The English-language edition of Outcasts of Empire was published in 2018. It was short-listed for the 2019 International Book Prize (best English-language book on Asia—Social Sciences, biannually awarded by the International Convention of Asia Scholars). 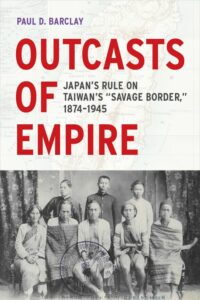